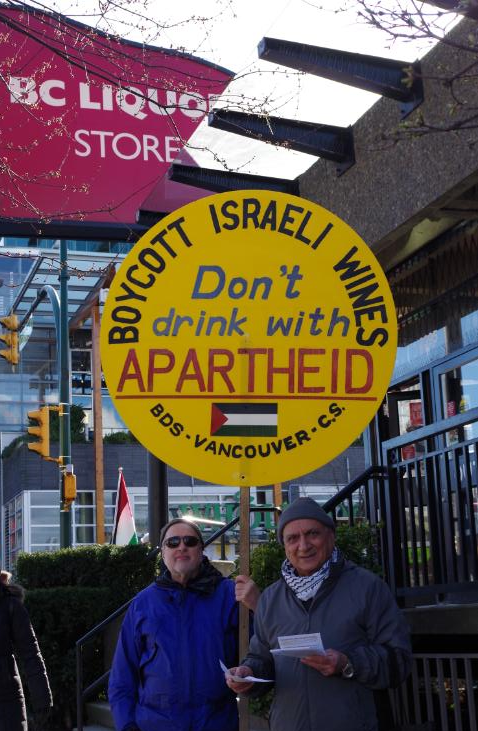 The British Columbia Liquor Distribution Branch is complicit in violations of Palestinian human rights. Despite calls from multiple local organizations for a boycott of Israeli wines, many produced in occupied Palestinian and Syrian territories in the West Bank and the Golan Heights, they continue to be sold in publicly owned BC Liquor Stores. Repeated appeals to the provincial cabinet ministers responsible for the Liquor Distribution Branch have seen no action and little response.

The Israeli wines carried in BC stores have consistently been linked to the Israeli settlement enterprise. The wines in question are either from the Golan Heights Winery and its joint venture the Galil Winery; or from the Israeli Teperberg Winery, which proudly displays a map on its website showing vineyards in occupied Palestinian territory. According to the progressive Israeli research group “Who Profits”, Teperberg Winery “owns and sources from vineyards in the occupied West Bank, including in the Ezion Bloc settlement and in Mevo Horon.”

Israeli settlements are illegal under the Fourth Geneva Convention and international humanitarian law. They are part and parcel of the systematic targeting of the Palestinian people for dispossession, occupation and apartheid for over 73 years. Consecutive BC governments have also been aiding and abetting the pillage of Palestinian and Arab property and resources, expressly forbidden in Article 33 of the Fourth Geneva Convention.

Earlier this year, the New Democratic Party NDP of Canada passed a resolution that committed in part to end “all trade and economic cooperation with illegal settlements in Israel-Palestine”. As noted in our April 19, 2021 letter to the Finance Minister in BC’s NDP provincial government (which has received no response to date):
“The sale of wines from illegal Israeli settlements in BC and Canadian liquor stores has been an ongoing travesty for over a decade; there is no better place for the NDP to implement its new policy (and for)… action to finally be taken on this issue. In September 2018, thirty-one organizations already told the BC government: ‘We do not wish to be made complicit in these violations of international law’.“

Human rights violations are not a valid “consumer choice” – but they are the choice being made every day by the BC Liquor Distribution Branch. These are our publicly funded stores and should reflect a commitment to human rights, including justice for the Palestinian people.

We are calling on B.C. Finance Minister Selina Robinson and the Liquor Distribution Branch to immediately halt this complicity in Israeli war crimes.  The current BC government has recently shown its disregard for the rights of indigenous people, with its violent raids on Wet’suwet’en territory. They need to make a change and respect international law rather than violating it.

From Turtle Island to Palestine, profiting off colonization is a crime!

(Group endorsements can be sent to cpavancouver@gmail.com; we will be updating the endorsers list on a regular basis. Please join us in saying: From Turtle Island to Palestine, Profiting off Colonization is a Crime!)