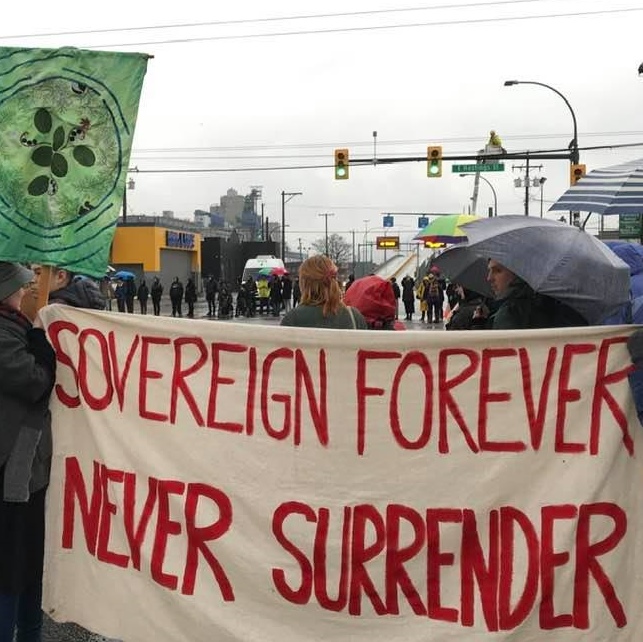 Feb. 13, 2020: CPA-Vancouver was honoured to have the following message read out earlier today to the protestors occupying BC Attorney General David Eby’s office. #WetsuwetenStrong

We in the Canada Palestine Association bring greetings to this rally and express our total solidarity with indigenous rights and land Defenders. We denounce the British Columbia and Canadian governments for their colonial violence and their callous disregard of indigenous rights. We know that the struggles of the indigenous people of this land and the indigenous people of Palestine have always been against the supremacist settler colonialist mentality, that has at its roots no respect for our humanity, our rights and our dignity. We also honour the brave resistance of our indigenous sisters and brothers all through their history and know that they believe, as we do, in defending their land to their last breath.

We have also stood in front of this exact same Minister’s office, demanding that products from illegal Israeli settlements not be sold in BC liquor stores. These are settlements built on stolen indigenous Palestinian land, stolen by brute force and deception.  These are products that directly aid in and support the oppression of the Palestinian people and the theft of their land. And we were also disrespected just as you have been. But we also pledge to continue the struggle until liberation.

Settler colonialism will be defeated, from Turtle Island to Palestine.