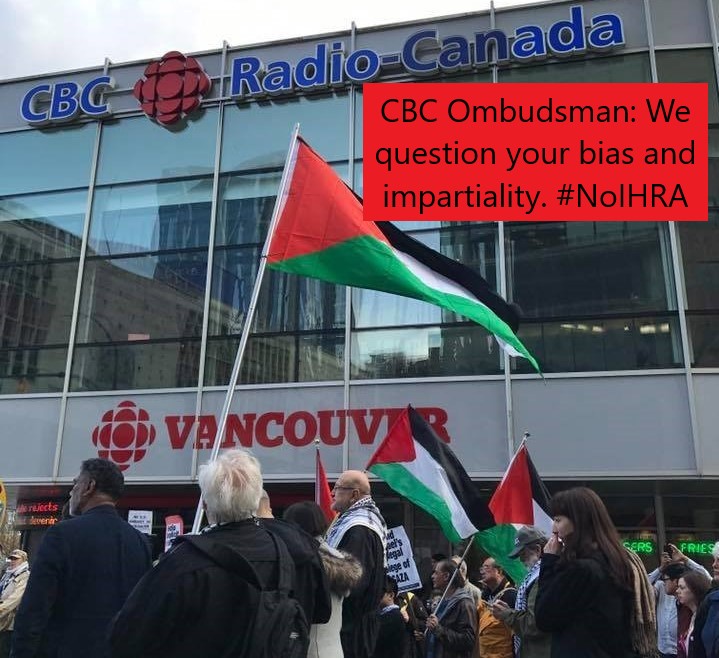 In his November 2022 Inbox, the CBC Ombudsman chose to comment on CBC’s coverage of Vancouver’s recent adoption of the IHRA; he did so before issuing his final report on an ongoing review, and clearly without any understanding of either the IHRA definition itself nor the dynamics of what happened at Vancouver City Council. Once again, it seems the CBC Ombudsman will fail the Palestinian community, similar to his 2021 ruling that the CBC “language guide” censoring the word Palestine was “reasonable”. The chairperson of CPA sent the following letter on December 6 to the Ombudsman, questioning his bias and lack of impartiality.

After reading your November 2022 Inbox, we feel compelled to express our opposition to the convoluted way you summarized the important issues brought up during the Vancouver IHRA debate.

You said:
“The journalistic issue seems to me less about whether there was controversy in either instance (there was), and more about the judgment CBC employs when deciding how much attention to pay to it. Unfortunately, there’s no single right answer to that question. The complaints have value, though, in informing programmers about Canadians who think CBC’s judgment calls are off-base.”

One of the pro-Israel groups supporting complaints to your office about CBC’s coverage on this issue, is now quoting this particular paragraph as proof that you agree with them.

You also noted: “It was the word “controversial” that seemed to spark most of the correspondence I received.” The reality in Vancouver is that the IHRA definition is, and was, and will continue to be, extremely controversial. And not just controversial; many people consider it to be a form of anti-Palestinian racism and suppression of free speech.

When the Union of BC Indian Chiefs, the BC Civil Liberties Association, and multiple other community groups that represent both Jewish and Palestinian advocates all stand with the same position, that the IHRA definition should NOT be adopted, then it would be amiss if Canadian media did not reflect this message. Even the Vancouver Sun covered the story in a similar vein, using the exact same terminology “controversial definition” in their headline.

To claim that giving coverage to this reality is potentially an “off-base” judgement call is not only misguided, it shows a complete disregard for what happened. You should consider that the complaints your office received were not a good indicator of how “Canadians…think” but simply part of a well-orchestrated campaign to shut down further dissent on this issue.

Your office should seek input on this issue from those who live in Vancouver, were actually part of this debate (where the vast majority of speakers opposed adoption of the IHRA), and who can attest to the fact that it was indeed more than “controversial”.

And finally, since you have chosen to speak on this issue even before issuing your final report, it is incumbent upon you to further educate yourself about what is included in the IHRA definition and its “illustrative examples”. It is not the initial short description included in your Inbox post that is the point of contention or even the intro to the examples; rather, it’s the 11 examples themselves, 7 of which reference the state of Israel and have been used to curtail criticism of the policies of Israel. This is the crux of the matter and has been well-documented, even by the main drafter of the definition. If you wish to rule fairly on this, you need to understand the background, especially in Vancouver where the IHRA was previously not adopted in 2019 by City council.

In fact, the main flaw in CBC’s coverage of this issue was its complete lack of any Palestinian point of view. As if Palestinians are not the direct victims of the IHRA’s suppression of their narrative, as if they are an “invisible” element to this debate, and as if there weren’t any Palestinian voices as part of the day-long City Council debate on the issue. The IHRA definition, while falsely claiming to fight one form of racism, is in fact promoting another: anti-Palestinian racism. It tells Palestinians their lived history cannot be openly expressed and that their narrative should be censored and limited; this is something many indigenous people have experienced at the hands of settler-colonialism.

We call on you, if there is any unbiased and impartial due process at CBC, to better inform yourself about the IHRA definition and the Vancouver City Council debate before you proceed further. You failed our community in 2021 when you ruled that CBC’s language guide was “reasonable” in its censorship of the word Palestine; we hope you won’t repeat this blunder again.