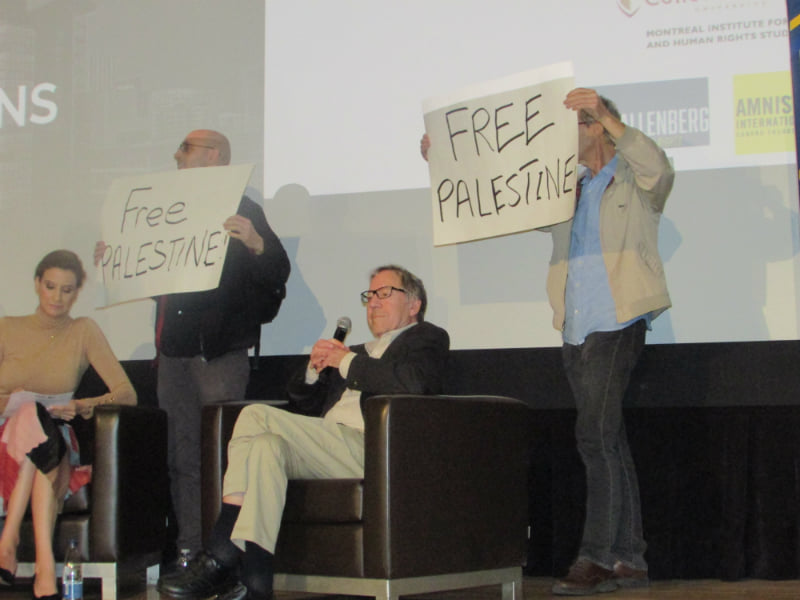 Pro-Palestine activists in Canada have been overloaded in the last few months with challenges surrounding the dangerous definition of Anti-Semitism promoted by the International Holocaust Remembrance Association IHRA.

First, Bill 168 in the Ontario legislature was set for committee hearings when the government hijacked the whole process by adopting the IHRA through an Order in Council. Then, just last week, the Trudeau government appointed none other than Irwin Cotler, a well-known pro-Israel advocate, as Canada’s Special Envoy for Holocaust Remembrance and Combatting Anti-Semitism. Cotler will also head Canada’s delegation to the IHRA and will work to “advance the implementation of this definition across the country and its adoption internationally.”

Clearly all appeals to rational dialogue over the chilling effects of adopting the IHRA have fallen on deaf ears. Canada’s largest province and its federal government have drawn the proverbial line in the sand. And activists now need to step up and intensify all of their other campaigns, from #StoptheJNF to #FreePoliticalPrisoners to BDS, as the most effective response.

Many academics and activists, be they Jewish, Palestinian or concerned supporters, have written scholarly and lucid articles on why the IHRA definition is flawed and confusing. It is very likely that pro-Israel advocates know full well the contradictions in this definition and that it would probably never stand up to a legal challenge. But that’s not the point. The point is that they have succeeded in not only defining and confining the parameters of pro-Palestine discourse, but have also successfully appointed themselves as the arbiters of what will constitute acceptable criticism of Israeli policies.

Shimon Koffler Fogel, CEO of the Centre for Israel and Jewish Affairs readily pointed out earlier this month that the IHRA definition notes that “criticism of Israel similar to that leveled against any other country cannot be regarded as antisemitic.” But who decides what criticism should be allowed or not? In Canada, it will now be Irwin Cotler, the man promoted by the Israeli media as “…one of the staunchest defenders that Israel has around the world”.

The man who PM Trudeau personally referenced when he publicly condemned the BDS movement. The man who sent his own submission to the International Criminal Court, arguing against an investigation into alleged Israeli war crimes in the occupied Palestinian territories. The Israeli newspaper Haaretz described him at the time this way: “Additional requests were submitted to the court by Irwin Cotler, a senior jurist and former justice minister of Canada who is considered very pro-Israel…”.

Surely, no-one with the slightest understanding of Middle East issues should expect Irwin Cotler to be anything other than anti-Palestinian and blatantly in favour of Israel in his new role. The Israeli media are abundantly clear on who he is and what he has stood for over the decades.

Last year, the Trump administration also appointed a Special Envoy to Combat Anti-Semitism, Elan Carr. Although Cotler and Carr come from vastly different backgrounds, both hold very similar views on what is considered “anti-Semitic behaviour”; both are intent in singling out the BDS movement and as Carr succinctly put it, consider “hostility to the State of Israel as the anti-Semitism of today”.

And then we have the infamous 11 accompanying IHRA examples. Woe to the less informed amongst us who tries to navigate what is acceptable or not. One example cites that “Holding Jews collectively responsible for actions of the state of Israel” is racist behaviour. I agree with that, but then what do we make of Israel’s Nation State law which openly declares that “The State of Israel is the nation state of the Jewish People”. How can most folks make sense of such contradictory declarations? They can’t and will probably end up concluding its better to say nothing and just avoid the issue altogether. Which seems to be the whole intent of the IHRA in the first place. If you can’t rationally convince most people that criticism of Israel is somehow anti-Semitic, then the next best thing is to just put a tight lid on the whole debate.

In fact, there are many examples of white supremacists that support Israel who consistently engage in anti-Jewish racism, but they are embraced by the current Israeli government. Why? Because it has become clear that is okay to be anti-Semitic as long as you’re pro-Israel. Which adds another dangerous layer to this whole affair, and seriously compromises the struggle against racism.

That struggle must also firmly acknowledge that Zionism is a form of racism, just as deadly as any other. For too long, progressive forces in Western countries have treated Zionism as a “lesser form” of racism, not as pernicious or aggressive. But this attitude is based mostly on an inherent bias against, and ignorance of, the lived experience of Palestinians; an attitude that has been exploited and manipulated for many years by both the Israel lobby and Western governments.

Adopting the IHRA definition is just one example of the attempts by those governments to shield Israel from criticism and divert attention from its war crimes, apartheid policies and racism against the Palestinian people. This process dehumanizes the Palestinian people by denying their existence, their culture and their narrative; it also criminalises any Palestinian for even talking about their memories and experiences. This amounts to institutional racism against a whole nation and its people.

Activists in Canada need to re-assess strategy going forward. Trudeau’s appointment of Irwin Cotler is a turning point, a watershed moment, a blatant rebuke of any sense of a fair-handed approach by the Canadian government to the Palestinian cause. And it must be responded to for what it is, a slap in the face for all those who believe in peace with justice for Palestine.

Another version of this article appeared in Mondoweiss.