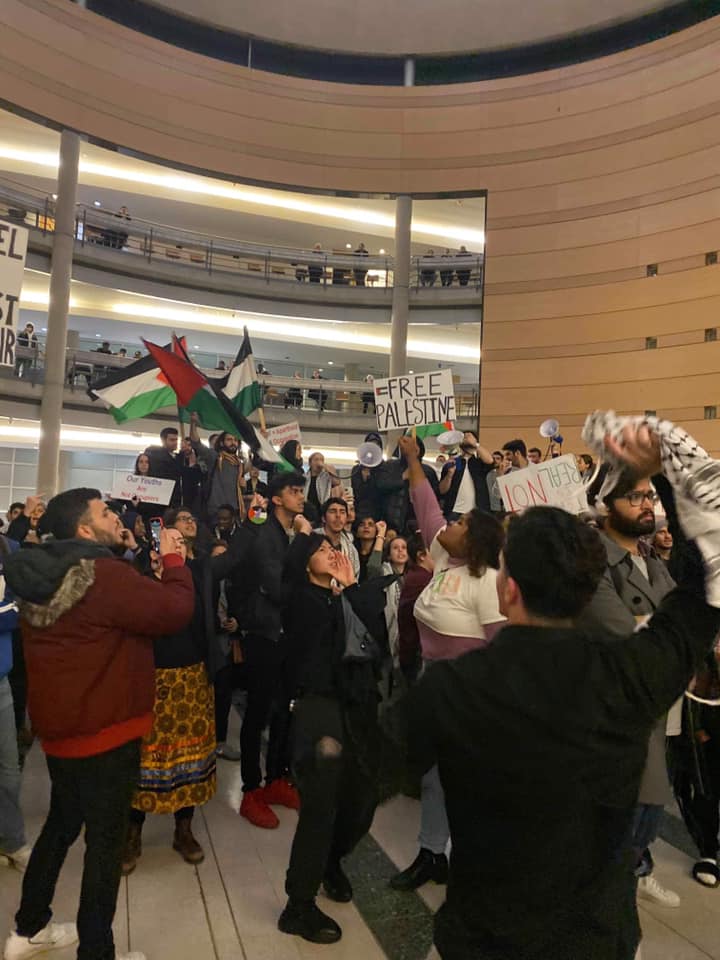 Pro-Palestinian groups on campus and their supporters were concerned and outraged that the university administration was even allowing the meeting to go forward and called for a public rally to protest such an event. The Jewish Defense League JDL in Canada quickly announced that they would be on campus to “counter” the rally; despite an official warning from the university administration, the JDL were present, were provocative and violent, and sent one protestor to hospital.

The JDL head even posted a video of himself during their counter-demo saying “We’re getting the job done here at York University, the JDL is here in force, we’ll do what we have to do…”; screenshots of FB posts from JDL supporters or members bragged about how “one of my boys knocked one of their guys out”. Never Again Canada, a leading pro-Israel group, posted a video on their FB of this injured person with the Islamophobic intro: “Dirty screeching Islamist banseeshes unconscious on the floor…”

However, despite all of this open admission of violence and shocking racism, Canadian politicians including PM Justin Trudeau have leapt to the defense of the JDL provocateurs, not the students and their right to protest.

The Zionist lobby went into overdrive as soon as the event finished and tried to take hold of the narrative. The first reports tried to emphasize how “violent” the students and their supporters were (even though it was one of their numbers who suffered a concussion) and repeatedly misrepresented the chant of “Viva, viva, intifada”, claiming it was somehow a slogan calling for the destruction of Israel.

However, the campaign to rewrite what happened at York really took off after a Jerusalem Post story was posted on November 21, 2019 (then dated Nov. 23 and revised Nov. 26), that opened with the following in the original version:

“’Intifada, Intifada, go back to the ovens,’ 600 violent, pro-Palestinian protesters chanted at Jewish students on Wednesday during a pro-Israel event at York University.”

And note the parameters here: 600 violent protestors (a coordinated action by the whole rally) chanting at “Jewish students”.

Almost every story written by pro-Israel commentators after that referenced this Jerusalem Post report, flaunting it as evidence of the nasty type of “anti-Semitism” inherent in Palestinian events. And it is a serious and dangerous accusation, one that you would think would require fact-checking and proof before printing.

I double-checked with the Jerusalem Post regarding any verification for the claim in their story. The author of the article replied in an email: “One of the speakers who was there – Shar Leyb – told me that this was chanted by the group while they were setting up for their event. I have a recording of him telling me this from when we spoke on Thursday afternoon.”

So there you have it. No hard proof, nothing but anecdotal and second-hand evidence from one extremely biased source with a very specific agenda.

And then, mysteriously, a few hours after my first email to Jerusalem Post, there appeared an updated version of the article with an editors note at the bottom saying: “A mistake in editing accidentally attributed the chant “Intifada, Intifada, go back to the ovens” to all of the protestors at the event. This was not the case. The comment was made by a handful of protestors to some of the organizers.”

A mistake in editing!! So clearly the first claim was bogus, false and could not be verified. Are we to believe the new version, which again will be solely based on the word of the same speaker from the event? The damage has been done, the smear was repeated and repeated, and a half-hearted revision five days after the first story will not undue the harm that has been caused. This is journalism at its worst; it is dangerous and shows no regard for the consequences of such a smear campaign. It also cheapens and distracts from the real acts of anti-Semitism.

It is incumbent on the Jerusalem Post to release this audio recording they claim to have, because we need to clarify how this dangerous fabrication came about. Was it from the speaker, Shar Leyb, or was it from the newspaper staff itself?

Multiple groups and individuals from diverse backgrounds who were at the event, including the Palestinian students, a member of Independent Jewish Voices Canada, folks from Christian Peacemakers Team and CUPE 3903 to mention just a few, had already strongly disagreed with these reports of what took place. Furthermore no video evidence had been produced to back up the claim; lawyer Dimitri Lascaris wrote a comprehensive blog piece that carefully documented and refuted the accusations of the Israel lobby.

He said in a follow up email: “I was not there but I have spoken to numerous participants and have viewed over 50 distinct video clips of the event, including videos posted on Never Again Canada and by other promoters of Israel. I heard no such language in any of the videos. Moreover, if in fact the group chanted this and a pro-Israel person in the crowd heard it, it is inconceivable that there would not be a recording of it. Surely someone would have shot a video of this and shared it widely on social media and with the Jerusalem Post.”

The events at York University have already taken on an international dimension with coverage from media in Lebanon; there was also a joint statement of support issued by the South African Union of Students and BDS South Africa in which they condemned “the recent violence against human rights defenders at York University in Canada.”

Many activist and community groups in Canada are calling for PM Justin Trudeau to stop slandering the student protest as “anti-Semitic” and “violent”, and are also calling on the York university administration to better protect students. This behaviour from politicians and officials is dangerous and inflammatory; it can and most likely will lead to further anti-Palestinian racism and targeting of student activists. How sad that once again, as in Gaza, the Israel lobby succeeds in convincing others to blame the victim for the violence inflicted on them.

As noted by Canada Palestine Association in their statement to the Canadian PM:

What happened at York University, both during and after the Nov. 20 meeting, is a microcosm of developments in the Palestinian solidarity movement: support is building, people are pushing back and challenging the Zionist lobby narrative, and pro-Israel groups and the Israeli government themselves are becoming increasingly desperate in their efforts to stop the cracks in their crumbling hegemony over public opinion.

This article was carried in Palestine Chronicle.