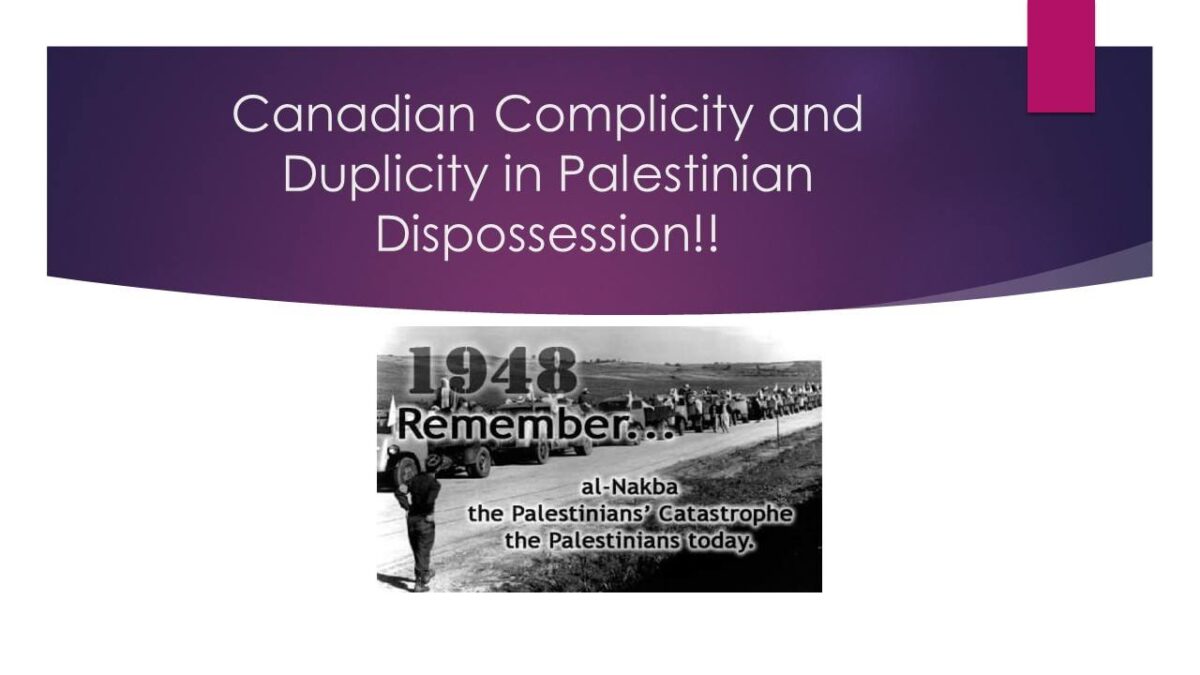 We remember our indigenous brothers and sisters, the victims of genocide by the European settler-colonialists in Canada and all over the world.

Justice and peace-loving peoples of the world will also remember Canadian complicity in Palestinian dispossession. Here are but a few examples of what we remember.

– The late Canadian Prime Minister Mackenzie King who “was effusive with praise for Zionism when he addressed the Ottawa convention of the Zionist Federation of Canada on 4 July 1922…he applauded Britain efforts (Balfour Declaration) in aid of the Zionist cause.” (1)

– Another former Prime Minister, Lester B. Pearson, who was instrumental in ensuring the passage of the U.N. Partition Resolution in 1947 and Supreme Court of Canada Justice, Ivan C. Rand, who was a central figure in drafting it. Mr. M.S. Massoud, president of the Canadian Arab Friendship League, told the Montreal Optimist Club at the time that the Arab world “would ‘remember’ Lester B. Pearson and Justice Rand … who … did their utmost to impose upon Arabs the infamous partition scheme.” Massoud called the Partition vote an act of betrayal by “the selfish interests of the so-called ‘Big Nations’, which broke, ignored, or forget their promises to the Arab people.” (2) In fact, “The Zionists were so grateful to Canada and to Mr. Pearson for the part he played in the whole process that they called him ‘the Balfour of Canada’.” (3)

– In 1948, “More than 300 Canadians eventually joined the Israeli forces while tons of military equipment, from Harvard training aircraft to radio sets, were smuggled out of Canadian ports.” … “The (Canadian) government was reluctant to draw attention to this matter and refused to invoke the Foreign Enlistment Act” in contravention of Canadian law and the U.N. embargo.(4) Yves Engler, in his book Canada and Israel Building Apartheid, noted “During the 1948 war, Israel’s small air force was almost entirely foreign, with at least 53 Canadians…”

– The Canadian House of Commons, on Nov. 12 1975, unanimously condemned the Nov. 10, 1975 UN General Assembly resolution that determined that “Zionism is a form of racism” … And some years later, even the horrific massacre of Palestinian civilians at the Sabra and Shatila refugee Camp in Beirut in Sep. 1982 could not elicit a unanimous expression of support from the House to express “its disgust for those forces that were responsible for this slaughter and urge upon them a policy of restraint so as to ensure that innocent lives of men, women, children and babies will not again be taken in either revenge or malice.” (5)

– The successive Canadian governments who have supported Israel unconditionally on all political, economic, military and diplomatic levels and accordingly enabled it in carrying out its genocide against the people of Palestine.

– All Canadian governments and officials who participated in the US military aggressions against the Arab people of Iraq, Libya, Syria, Egypt, Yemen and Bahrain and supported the most despotic, dictatorial and autocratic Arab regimes.

– And earlier this year, on February 22nd, Canadian MPs voted 229-51 to condemn BDS and even individuals who promote it.

– This is but a small sampling of official Canadian complicity in US-Israeli war crimes!

And finally, we remember all those who supported the Palestinian people’s struggle against Zionist settler colonialism and all those who condemned and exposed Israeli ethnic cleansing, war crimes and apartheid. Special mention goes to the first national leader of the Co-operative Commonwealth Federation (CCF) J. S. Woodsworth. In 1938, when approached to get CCF support for the Zionist settler project, he noted that it was easy for Canadians, Americans and the British to agree as long as it was somewhere else and stated, “Why ‘pick on the Arabs’ other than for ‘strategic’ and ‘imperialistic’ consideration…?” (6)

We will remember those who were complicit in Palestinian dispossession and contributed to the suffering and dismemberment of a whole people and nation, just as we remember those who stood with human rights and justice.
Lest we forget…

This article was first published by the PalestineChronicle.com.