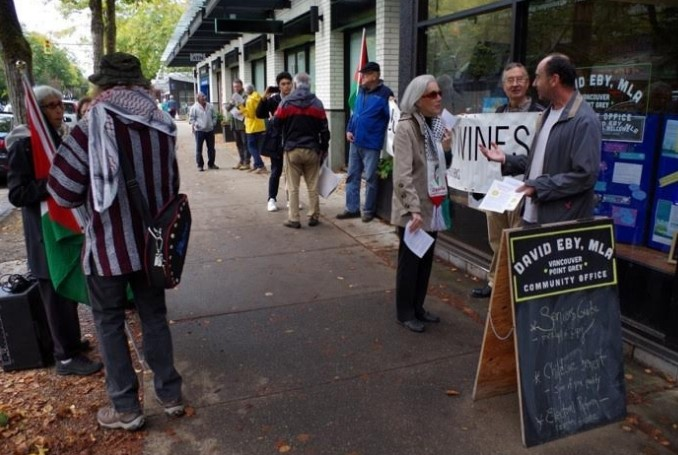 The picket also delivered a copy of the letter signed by 26 organiztions to Eby’s office, emphasizing our concerns with the BC NDP government’s policy. Eby finally sent a brief written response but refused to meet with our campaign representatives in person, saying “my schedule does not allow me to meet with you at this time.” Although he was finally obliged to meet with a small group of his own constituents on the issue, no action of any sort was forthcoming, not from Eby nor from the minister who inherited the BCLDB portfolio, Finance Minister Selina Robinson.

Recently, NDP leader Jagmeet Singh reiterated his party’s commitment to “end all trade and economic cooperation with illegal settlements in Israel-Palestine”, based on the resolution already passed at their 2021 convention. As noted in our April 19, 2021 letter to BC Minister Selina Robinson:
“The sale of wines from illegal Israeli settlements in BC and Canadian liquor stores has been an ongoing travesty for over a decade; there is no better place for the NDP to implement its new policy (and for)… action to finally be taken on this issue.“

But despite stonewalling us for years with lame excuses, the BC NDP government joined other provinces in just 2 days in putting a “…halt to the importing and sale of Russian liquor products from our BC Liquor Stores and provincial liquor distribution centres”. Just two days! And supposedly all in the name of standing with those “who want to live in peace and against those who commit deplorable and illegal acts of aggression.” (Except when it comes to Palestinians of course). So it can be done and done quickly. It just depends on who you are and what political agenda is being served.

So we call on the BC NDP government to stop their crass hypocrisy and respond to the concerns of multiple individuals and organizations regarding the stocking of Israeli apartheid wines. We refuse to be made complicit in Israeli war crimes; your lack of any significant action on this issue puts your government and party’s credibility and ethics into question!