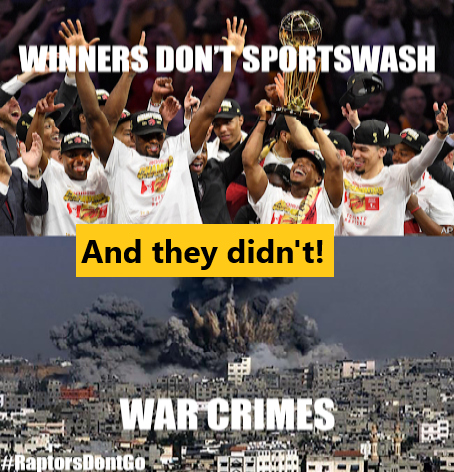 The Canadian BDS Coalition is pleased to announce that the #RaptorsDontGo campaign has been successful. Our campaign was launched in June 2019, immediately following the Raptors victory in the NBA championship; and after team co-owner Larry Tanenbaum received extensive coverage in the Israeli media stating he would bring the team to visit Israel if they won the championship. The Israeli Embassy in Ottawa highlighted the issue, and tweeted the Raptors promising “we’ll call you…to help with the arrangements”.
However, the 2019-20 NBA new season has now begun and there has been no reported public team visit; and continued silence from all of the team owners on this issue.
The campaign from the onset seemed to strike a chord with many people, both in Canada and globally. Although the Israeli lobby has engaged in other sportswashing events, this particular attempt struck many as an incredibly blatant and crude exploitation of a popular victory for an overt political agenda.

#RaptorsDontGo took off on social media and the Coalition would like to thank all of the individuals and groups who helped the campaign become so popular so quickly. Our petition gathered over 6500 signatures, a parallel petition in the U.S., started by CodePink, had over 2700 people sign on, and Jewish Voice for Peace also picked up the campaign on social media.
The Chair of BDS Vancouver, Aiyanas Ormond, stated in an open letter: “Around the world poor and oppressed people have embraced basketball as a sport of the people, and basketball players, many of whom come from poor and struggling backgrounds, have an important history of taking progressive positions and giving back to their communities. From Kareem Abdul Jabbar and Bill Russel’s stand with Mohammed Ali against the draft and the Vietnam War to public and collective statements against police brutality against Black people in America, NBA players have stood on the side of social and racial justice.”
Why exactly the Raptors team never went on the “promised trip” may have been the result of several factors, not the least of which was the quick and overwhelmingly negative response by so many basketball fans. This must surely have been noticed by the team’s owners – Bell 37.5%, Rogers 37.5% and Tanenbaum’s company Kilmer Sports 25%. Although Tanenbaum’s entity may not be impacted by public opinion on this issue, Bell and Rogers certainly are and have their broader business agenda to consider. Also, the protests that happened in Israel after the police shooting of an Ethiopian teenager on June 30, 2019, some referencing slogans of the Black Lives Matter movement, would have been a politically damaging backdrop for such a team visit.

The Canadian BDS Coalition is grateful that this visit did not materialize, as it would have given legitimacy to Israel’s war crimes. We feel the #RaptorsDontGo campaign also demonstrated the strength of popular grassroots campaigns that can mobilize to achieve justice for Palestinians. As with the Boycott Puma campaign, that calls out that company’s sponsorship of the Israeli Football Association which includes teams from the illegal settlements, the push-back on sportswashing of Israel’s dispossession of a whole nation and people is a critical part of the struggle for Palestinian rights.

Check out the new articles in Mondoweiss and Palestine Chronicle