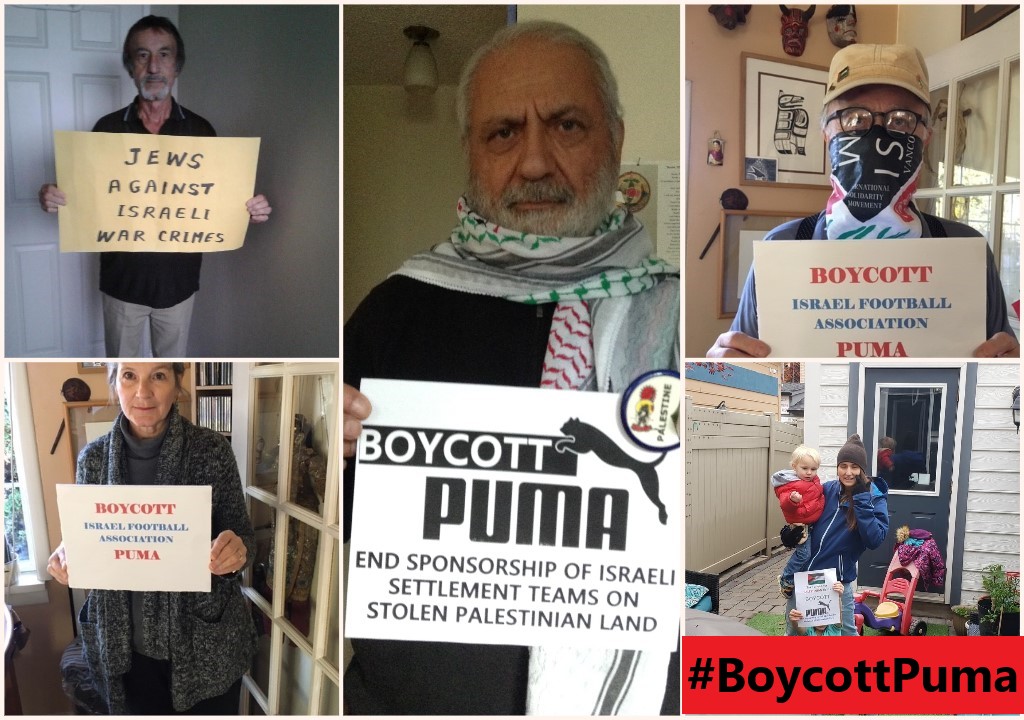 New update on Puma campaign – Puma Swaps One Complicit Israeli Distributor for Another.

(Puma responded quickly to our December 9th letter, which over 25 organizations in Canada had endorsed. Following is our reply to them, as well as a copy of their letter.)

Thanks for your quick reply to our letter. However, our main concern about Puma sponsorship of the Israel Football Association IFA remains unanswered.

Puma’s current exclusive licensee in Israel, Delta Galil Industries, has been listed on the United Nations database of companies that are complicit in, or profit from, illegal settlement activity. So it is encouraging to hear that the contract with Delta Galil expires at the end of 2020 and there is a new distribution contract with Al Srad Ltd, that “does also not have any operations or branches in settlements”.

However, this does not change the fact that Puma is still a sponsor of the Israeli Football Association IFA. An association that you acknowledge in your letter includes teams from illegal settlements. Having the Puma logo proudly displayed on the IFA website connects your company with this egregious violation of international law. To claim that Puma does not directly put jerseys on the backs of players in those specific illegal settlement teams in no way alleviates that complicity.

In today’s global economy, a company’s brand is its currency. Your brand is tainted by your involvement with the IFA. As we said in our original letter, “we will not purchase Puma products until the company stops these unethical practices, and until the Puma logo is no longer featured on the website for the Israel Football Association”. Until then, we are keeping Puma out of our shopping cart.
________________________________________
Puma’s Response to our Initial Letter:

With regards to your recent memo, please know that PUMA does not support football teams in settlements nor does its Israeli distributor have branches in settlements.

PUMA’s local distribution partner Delta Galil supplies the Israeli National Teams with PUMA branded football equipment to compete in international competitions. PUMA’s contract with its Israeli distributor Delta Galil will expire at the end of 2020. The new distribution contract is with Al Srad Ltd, a company of Irani Corporation. Al Srad Ltd. does also not have any operations or branches in settlements. It is the decision between our new distributor and the Israeli Federation to mutually agree whether to continue the cooperation or not.

PUMA does not have any other connection or association with any other Israeli football club team – neither in mainland Israel nor in settlements. The six football clubs (Ma’ale Adumim, Ariel, Bikat HaYarden, Kiryat Arba, Givaat Zeev and Oranit) which play in different leagues of the IFA and are based in the West Bank are not equipped with PUMA products, but by other sports brands.

PUMA continues to support and outfit athletes from all backgrounds, regardless of race, color, creed, religion, sexual orientation and national origin. As a brand concerned only with the power that Sport has to bring people together, PUMA does not support any political direction, political parties or governments. We welcome the opportunity to help everyone compete in sports no matter who they are or where they are from.