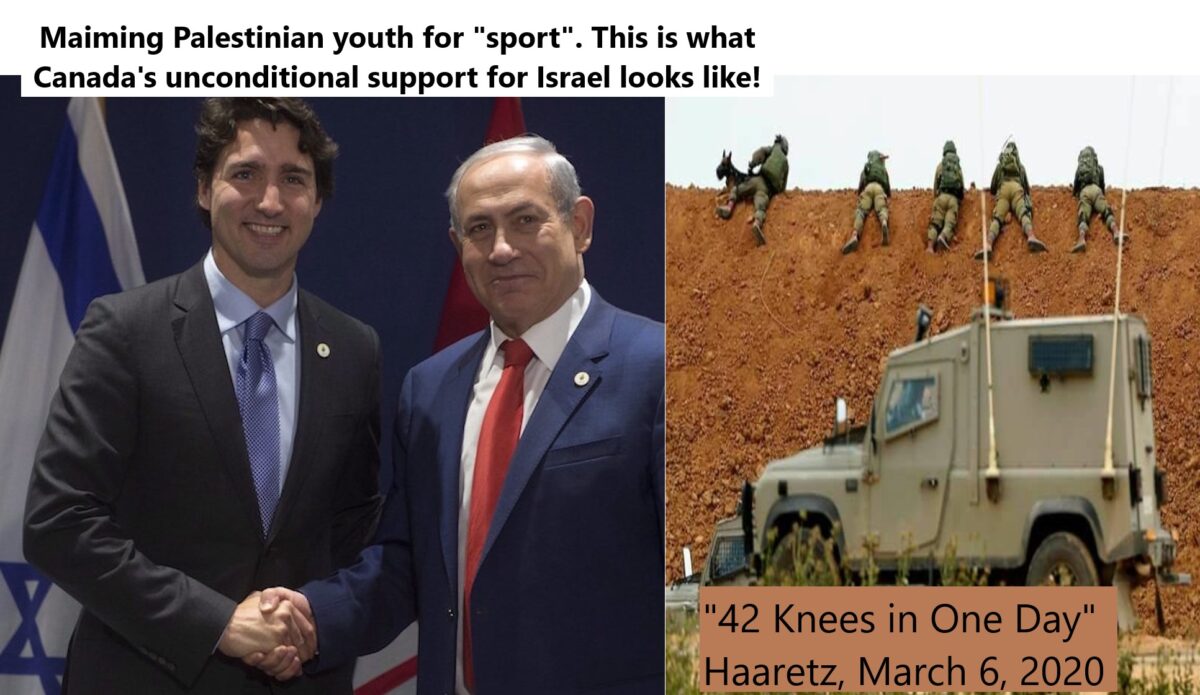 Maiming Palestinians for Sport is a War Crime

The new Haaretz report entitled “42 Knees in One Day” is a difficult and painful read, and many people of conscience have responded with disgust and rage.

For those few who have not seen the report, it details in chilling fashion the accounts of 6 Israeli snipers who were stationed at the border with Gaza during the Great Return March protests. The report is long and gruesome; I had to put it down and then return to it several times. The “42 knees” reference is the “high count” for how many Palestinians were maimed by a single sniper team in one day.

The over-all message is one of devastating impunity and disregard for the sanctity of Palestinian life. Palestinians and their long-time supporters have always known this was the mentality at play, but to see it all compiled in one place, in black and white, in the soldiers’ own words, was damning.

Especially here in Canada, where barely a week earlier, it was revealed that the Trudeau government had called on the International Criminal Court not to investigate war crimes accusations against Israel.

This is the same Canadian government that is busy travelling the world trying to get (or buy) votes for a UN Security Council seat. That has sent Joe Clark, a former Prime Minister, to visit multiple Arab countries looking for support; the Joe Clark that pioneered the idea of moving Canada’s embassy from Tel Aviv to Jerusalem back in 1979, an election promise that he was later forced to abandon. The same government whose Deputy PM and former foreign minister, Chrystia Freeland, informed an Israeli audience in late 2018 that Canada would be an “asset for Israel” at the UN Security Council if it got one of the non-permanent member seats.

Canada, and other governments, must understand that there is a direct trajectory from their unconditional support for Israel to the continuation of Israeli war crimes against the Palestinian people. Hampering the ICC investigation, refusing to accept your own court’s decision on labeling of Israeli settlement wines, smearing pro-Palestinian advocates as “anti-semitic” as happened at York University last year, all of this enables the Israeli government and military to feel they are immune to any sort of accountability.

This new report on Israeli sniper violence against Palestinians is most profound in what lies in the shadows: the Israeli military’s crude but effective approach. Promoting the concept that maiming these Palestinian youth is somehow “more humane” than killing them outright. But permanently disabling them in a poor society with few resources for the healthy let alone the injured, is an equally cruel fate. And a poignant and daily reminder to the rest of that society of the price to be paid for rebellion.

Most of the sniper accounts demonstrated a total lack of appreciation of the consequences or severity of their actions. One said, when talking about the other soldiers and their initial reaction to maiming their victims: “He has fulfilled himself just now, it’s a rare moment. Actually, the more he does it, the more indifferent he’ll become. He will no longer be especially happy, or sad. He’ll just be.”

The snipers work in a team with a locator and the “42 in one day” soldier, related how he suggested to his locator to take over the shooting when they were getting close to the end of their shift because “he didn’t have knees”. And “you want to leave with the feeling that you did something”. (Note its just “knees”, not Palestinian lives or limbs.) The parallel here with how sports teams allow rookie players to be involved at the end of a game that they know they are winning, is unmistakable. And it also highlights that these snipers didn’t seem to feel threatened and had few concerns about their own safety.

I realize that the Israeli snipers are themselves indoctrinated kids. But I hate the system and ideology that brought them to this, that placed them on those dirt embankments overlooking the people of Gaza, that made them think this was all “sport” or a video game where the player with the most points wins. And if I feel such rage thousands of miles away, I can only imagine (and will never judge) how the youth of Gaza and their families must feel.