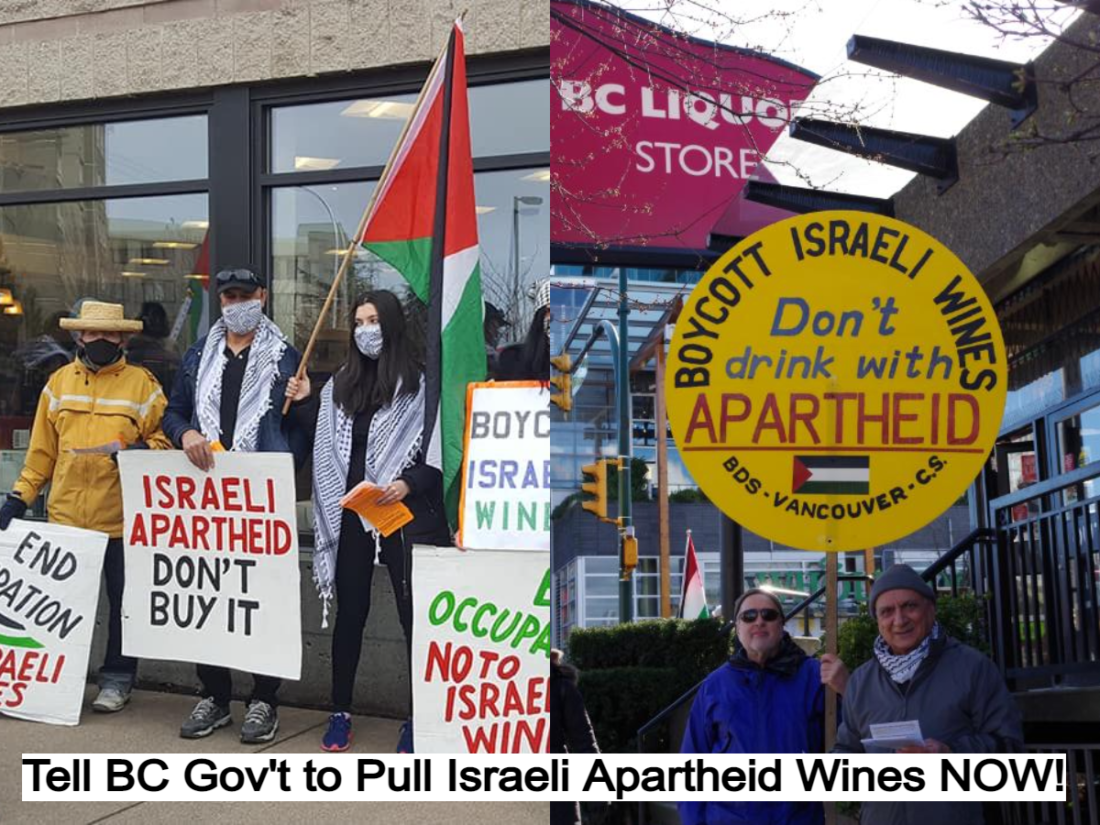 Our “Friends of the Campaign” initiative highlights notable friends and allies who have endorsed our letter campaign to “Tell BC Govt to Pull Israeli Apartheid Wines!”. We appreciate the support of Roger Waters, Libby Davies, former and current Vancouver city councillors, IJV members, local artists, lawyer Dimitri Lascaris and professor Sunera Thobani amongst others. (The list of endorsers to date follows the text of the letter.)

Text of Letter
To: BC Premier John Horgan
BC Finance Minister Selina Robinson

I am writing to express my outrage at the refusal of BC government officials to remove Israeli apartheid wines from publicly owned liquor stores. Your recent action in quickly putting a “…halt to the importing and sale of Russian liquor products” clearly demonstrates that your government can take decisive action. However, your unwillingness to do the same for Israeli wines shows a hypocritical double standard that smacks of racism.

Human rights activists in BC have sustained an on-going campaign for 14 years to have Israeli wines removed from liquor store shelves, most of which are linked to the Israeli settlement enterprise. They have detailed that the wines in question are either from the Golan Heights Winery and its joint venture the Galil Winery; or from the Israeli Teperberg Winery, which proudly displays a map on its website showing vineyards in occupied Palestinian territory.

Israeli settlements are illegal under the Fourth Geneva Convention and international humanitarian law. They are part and parcel of the systematic targeting of the Palestinian people for dispossession, occupation and apartheid for over 73 years. Last year, the New Democratic Party NDP of Canada passed a resolution that committed in part to end “all trade and economic cooperation with illegal settlements in Israel-Palestine”. The Canadian government also acknowledges the illegality of Israeli settlements in its official policy.

Further, major international and Israeli human right groups, including Amnesty International, have determined that Israel is committing the crime of apartheid. Therefore, I demand that the BC government immediately de-shelve Israeli wines from our publicly owned liquor stores; I do not wish to be made complicit in supporting apartheid.

Friends of the Campaign: