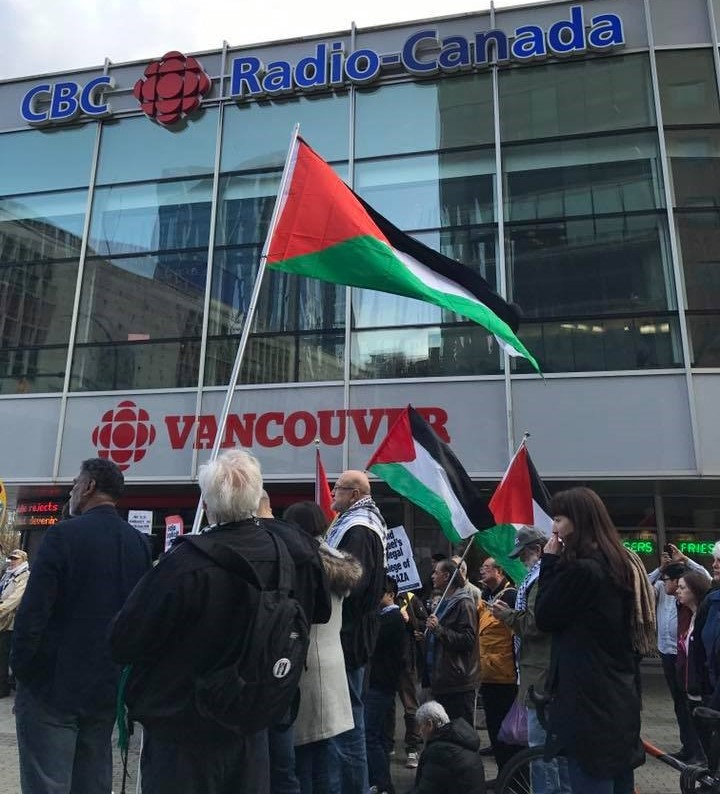 Are they Palestine-phobic? Or just racist? We have officially asked them to explain their process in arriving at such a sweeping censure of all things Palestine, and await their reply.

“I referred to the Palestinian territories as ‘Palestine,’ we apologize.”

This surreal statement was carried last week on CBC, Canada’s national broadcaster. Why? Because the guest host on The Current had dared to use the word Palestine during an interview. And to make the issue even more ludicrous, the interview was with graphic journalist and war correspondent Joe Sacco on “the themes of colonialism and resource extraction”.

The pro-Israel lobby group Honest Reporting (HR) quickly spun into action to tell CBC that in fact, the use of Palestine goes against CBC’s own language policies. Absurd enough yet??

Apparently, according to HR, this is from CBC’s language guide:

“… there is no modern country of Palestine, although there’s a movement to establish one as part of a two-state peace agreement with Israel. Areas under the control of the Palestinian Authority are considered Palestinian territories: Fatah-run West Bank and Hamas-run Gaza Strip.”

We will assume that this is accurate because the outrageous apology followed the day after the original interview. All of this led HR to gloat on their website about how they keep CBC in check regarding the non-existent Palestine.

And this isn’t the first time that activists have had to deal with CBC’s anti-Palestinian policies. Two years ago, Canada Palestine Association launched a formal complaint with CBC management that went all the way to their Ombudsman Office. It again involved changes in specific language that CBC had made in its reporting on Palestine after a complaint from HR, that time during the beginning of the Great March of Return. And it ended up (albeit through a much longer and winding route) with the same results – CBC stated it changed their reporting in order to more properly follow its own language guidelines. (Even though as regarded one point of terminology, the usage of “Arab Israelis” rather than Palestinians in Israel, the Ombudsman Office admitted there were no written protocols).

We hold CBC accountable for these decisions. The Zionist lobby is simply doing what it is meant to do – promote Israel by all means. Honest Reporting Canada clearly states on its website: “As an organization dedicated to defending Israel against prejudice in the media, we aim to provide educational tools and resources to anyone wishing to advocate for Israel”.

CBC on the other hand, is not doing what it is mandated and entrusted to do. Its “Journalistic Standards and Practices” document commits to accuracy, balance, objectivity and impartiality. And its governance policies are peppered with fine-sounding words like “reflecting differing views…fully and fairly…in a balanced manner…broad range of opinion”.

But just don’t say Palestine, or say that there are Palestinians in Israel. The mind boggles at how a reporter would have to handle a story talking about or with Palestinians under occupation, in exile and in the Galilee.

Never mind that 138 countries recognize Palestine as a state, as does the United Nations and multiple UN organizations. But no, CBC is following the same pattern as successive Canadian governments. Let’s not forget the same reasoning was used by the Trudeau government in claiming the International Criminal Court had no jurisdiction over the charges of Israeli war crimes in Gaza. Canada and its institutions are not representing the majority opinion of Canadians and are also completely out of step with international opinion. Its small wonder that they lost the recent bid for a UN Security Council seat.

Not CBC, nor the Canadian government, nor the Israeli government, can deny the existence of Palestine and its people. These churlish and supremacist attempts at erasing Palestinian identity will not succeed and only increase the resolve of the Palestinians and their supporters to fight for justice.

Another version of this article was carried in Canadian Dimension.