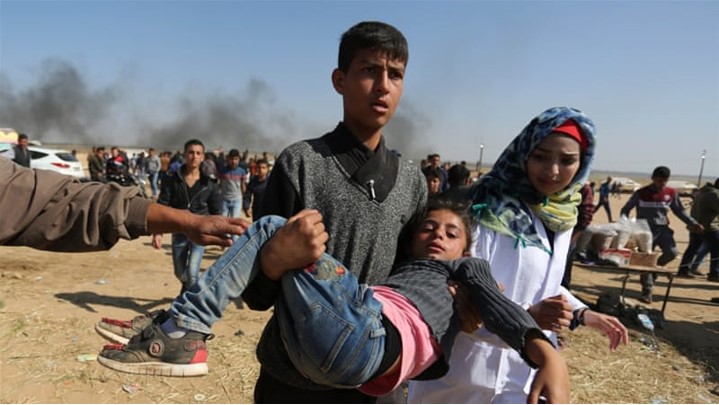 Due to the recent public health concerns, our event to support Palestine and to demand an end to the crippling siege on Gaza will become a social media action. Stay tuned to the FB Event Page for memes, twitter campaigns and other actions you can take between March 28-30th to show the Israeli government and the world that they will be held accountable for their war crimes!

Israel has killed more than 250 Palestinian protesters and injured a further 30,000 since the start of the Great Return March in Gaza 2 years ago. These ongoing protests have seen thousands of Palestinians fighting for their right of return to their villages and homes from which they were forcibly removed. Israel’s unlawful killing of protesters – including women, children, journalists and medics – have been marked as potential war crimes by the UN.

Hewlett Packard branded companies play a key role in Israel’s oppression of Palestinians. They provide equipment and services to the Israeli prison system, military and government, including the ID card system that underpin Israel’s apartheid policies and its movement restrictions for Palestinians. HP provides Israel’s Population and Immigration Authority with the exclusive Itanium servers for its Aviv System. This system enables the government to control and enforce its system of racial segregation and apartheid against Palestinian citizens of Israel, and is directly involved in Israel’s settler colonialism through its “Yesha database”, which compiles information on Israeli citizens in illegal settlements in the occupied Palestinian West Bank.
https://bdsmovement.net/boycott-hp