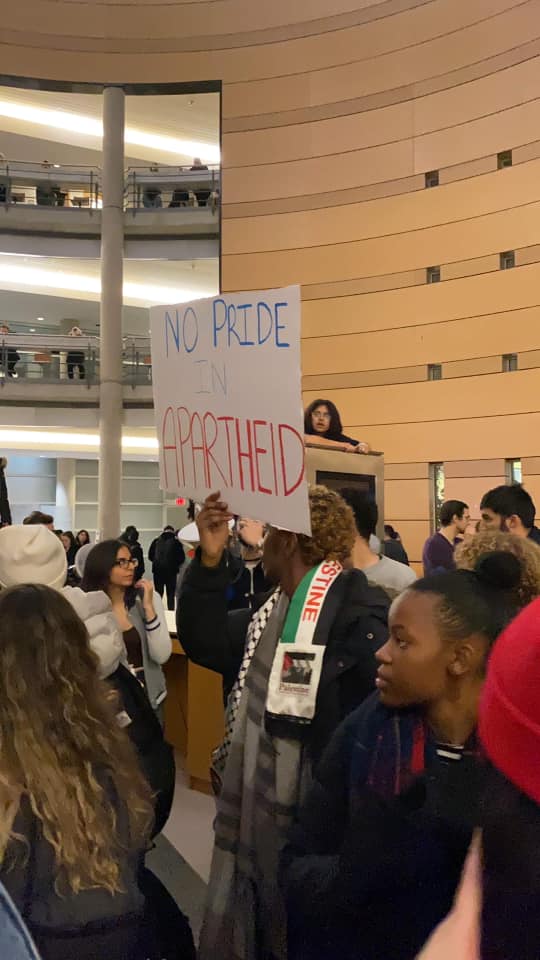 (The coverage of our statement and other updates on Palestine Chronicle).

Last month, Palestinian students and their supporters at York University were thrust into the spotlight after holding a protest against an event that brought former Israeli soldiers to campus. What happened during that evening and the ensuing aftermath have been an eye-opening expose on how the Zionist lobby works to discredit and falsely smear Palestinian activists as “violent” and “anti-Semitic”.  A master class in how alarmist hyperbole, mixed with a dash of blatant fabrications, and then repeated often enough, can become accepted “fact”.

Students Against Israeli Apartheid SAIA-York and the other groups on campus should be commended for not only standing strong despite all the invective thrown at them, but also for forcing the parameters of the follow-up discussion to be broadened. The position of the university administration has changed since the initial reaction, although their false parity of penalizing both SAIA and the Zionist club on campus and their insistence on forced “mediation” is akin to telling Rosa Parks to sit and negotiate with the KKK.

However, York has now also been obliged to call for an independent inquiry into what happened, following a strongly worded letter from Amnesty International. We are certain that if there had not been such significant pushback since day one from so many diverse student and community groups, the university would have proceeded with sanctioning only SAIA and the pro-Palestinian protestors.

We hope that this investigation will deal with the behaviour of Herut Canada and how their Toronto leader, as early as November 22, stated that her security organizer had invited not only the Jewish Defense League, but also “Jewish motorcycle groups” who came out and provided “protection” for the event. Are we to believe that York University, or any post-secondary institute in Canada, approves of student groups bringing members of a motorcycle gang on campus for event security? We can only imagine the howls of indignation if SAIA had invited an “Islamist motorcycle group” (if one existed) to help them with security at their protest.

In fact, one of these biker groups mentioned by the Herut coordinator, Lauren Isaacs, is The Riders of the Covenant. Their FB page states the following: “The ROC seek to unite active, proud motorcycle riders and members of the public in using their combined influence to promote and protect the democratic, Judeo-Christian, civilized western societies way of living.” Really?! This is what York University stands for?

You would expect York University administration to clearly disassociate themselves from such blatant racism, and also denounce those who brought such forces onto campus. But no, they are busy focusing on their phony “facilitated mediation” and bragging about their “commitment to inclusion, respect and diversity”.

Multiple accounts of what happened on November 20th have been published that discredited the Zionist claims; but both the corporate media and politicians, especially PM Justin Trudeau, are maintaining the narrative that it was the student protestors that were “violent” and “anti-Semitic”. Just this past week, Trudeau insisted on repeating his smears during a ceremonial Menorah lighting on Parliament Hill in Ottawa. Lets reflect for a minute on how this seamless transition between a religious ceremony and an attack on students for exercising their democratic rights is considered acceptable. In fact, Trudeau also used the same occasion to declare how his government’s “enduring friendship with Israel remains”, after receiving criticism for his orphan vote at the United Nations Third Committee last month.

And the media. First the fabrications by the Jerusalem Post about who chanted what at the protest and then further inflammatory headlines and articles by the Toronto Sun, part of the PostMedia conglomerate. Both the Post and the Sun were forced to put revisions on at least one of their stories about what happened, and Canada Palestine Association has now submitted a complaint to the National NewsMedia Council about the Sun reporting.

What happened that night at York, and what followed and will still follow, is a critical test for Palestinian solidarity activism in Canada. The Zionist lobby is clearly becoming increasingly desperate and aggressive in its efforts to discredit and remove the Palestinian voice. This is a watershed moment for all activists – either we stand strong together or be prepared to weather the consequences, perhaps for years to come.

The Canadian media and Canadian politicians, including the PM, are as guilty as the Zionist and pro-Israel lobby in promoting anti-Palestinian racism. We in Canada Palestine Association tell all of them that racism against Palestinians, Arabs and Muslims is as repugnant and offensive as any other form of racism.