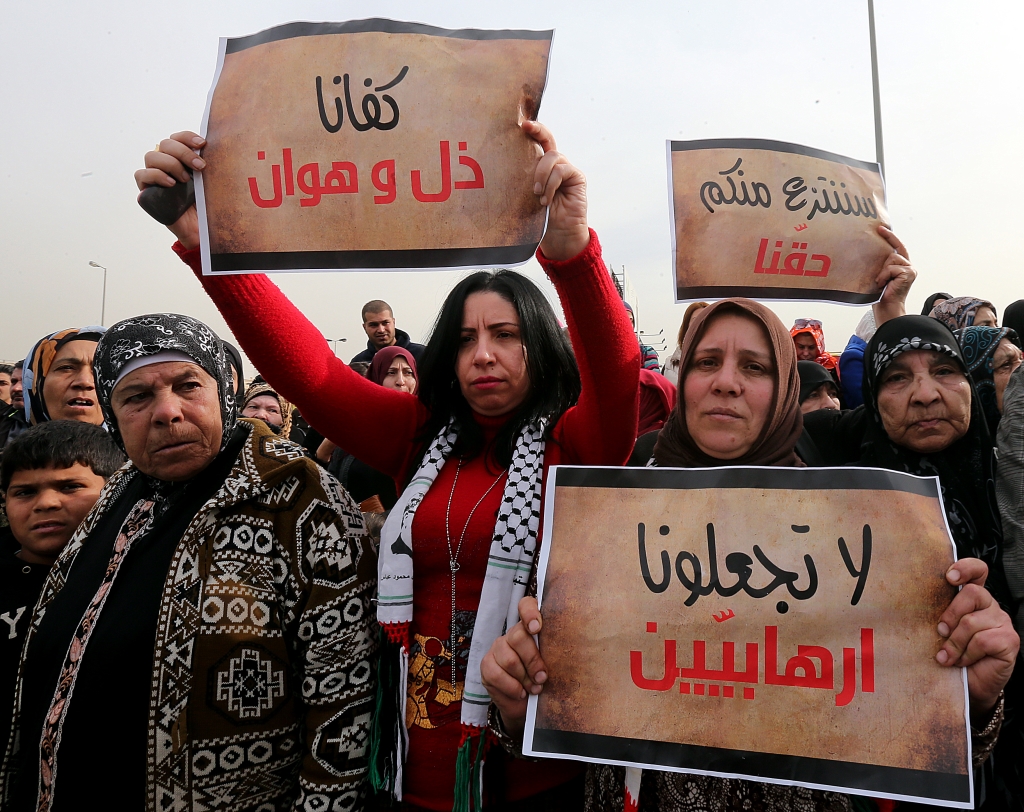 “We Will Regain Our Rights”

Zionism is a settler colonialist movement that not only committed genocide against the indigenous people of Palestine, it also uprooted them from their homeland.

My experience as a Palestinian refugee started when I was in my mother’s womb, as Zionist terrorist groups chased my parents out of Yafa (Jaffa) in 1948 where my father was working and my mom was about to deliver their first child. They fled to go live in our hometown of Bethlehem. We were displaced again, a second time, after the Israeli aggression of June 5, 1967. Those pictures of young and old going across what was then called the “Allenby Bridge” was my lived experience.

Since I was a young man, I always dreamed and hoped that I will return to live in my hometown where I was born and raised. In diaspora I still hold on to the deed to our family property in Bethlehem, passed down to me from my grandfather Elias. The simple reason I am not there is that Israel refuses to allow Palestinian refugees to return to their ancestral land and properties, in violation of UN resolution 194. Further relating to my situation, Israel also refuses to allow “Persons displaced as a result of the June 1967 and subsequent hostilities” to return, again according to a UN resolution that is passed annually with a large majority. Canada has also consistently voted against this specific resolution, even though Canada’s stated foreign policy hypocritically claims that “Canada does not recognize permanent Israeli control over territories occupied in 1967 … The Fourth Geneva Convention applies in the occupied territories and establishes Israel’s obligations as an occupying power…”

Israel not only blocks Palestinian refugees from returning, but according to a recent report, studied how to push them out in the first place (otherwise known as planned ethnic cleansing):
“Newly-uncovered documents reveal how Israel established the ‘Professors Committee’ in the days following the occupation to devise policies to pacify the Palestinians and make them leave the West Bank and Gaza permanently.”

I expect such arrogant flaunting of UN resolutions from the supremacist regime Israel that uprooted my people and committed genocide against my nation. But far more upsetting and dehumanizing are the positions of Canada, that played and continues to play a pivotal role in Palestinian dispossession.

• The late Canadian Prime Minister Mackenzie King who “was effusive with praise for Zionism when he addressed the Ottawa convention of the Zionist Federation of Canada on 4 July 1922…he applauded Britain efforts (Balfour Declaration) in aid of the Zionist cause.” (Canada and the birth of Israel, David J. Bercuson, page13.

• Lester B. Pearson, Canada’s under secretary of state, was instrumental in ensuring the passage of the U.N. Partition Resolution in 1947 and Supreme Court of Canada Justice, Ivan C. Rand, was a central figure in drafting it… “The Zionists were so grateful to Canada and to Mr. Pearson for the part he played in the whole process that they called him ‘the Balfour of Canada’.” Report of the Canadian Standing Senate Committee on Foreign Affairs published June 1985, page 49.

On May 11/1949, Canada co-sponsored the U.N. General Assembly resolution 273(111) to admit Israel as a state to the U.N. That resolution stated: ” Recalling its resolution of 29 November 1947 (the Partition Plan) and 11 December 1948 (the Right of Return), and taking note of the declaration and explanation made by the representative of the government of Israel before the ad hoc Political committee in respect of the implementation of the said resolutions (my emphasis), the General Assembly … decides to admit Israel into the membership of the United Nations.”

Since the Nakba of 1947/1948, Canada has not missed an opportunity to liquidate the Palestinian Right of Return. Its main objective has always been to “resettle” Palestinian refugees; its contributions to the UNRWA were and are politically motivated, and have always been in the service of western imperial designs. As early as March 25, 1955, before the House of Commons, Leader of the Conservative Opposition John Diefenbaker clearly stated:
“… certainly there is no sorer spot than these camps which, as one visits them and leaves them, cannot help but impress one with the awfulness of the situation in which these people find themselves. The minister mentioned Canada’s contribution, and I think that is one contribution that does leave an impression upon the people who receive it. In addition, it is building a bulwark against the spread of communism in these areas”

Eventually realizing that Canada should “cover its tracks” on its policy of resettling Palestinian refugees, the Canadian Standing Senate Committee on Foreign Affairs’ “Report on Canada’s Relations with the countries of the Middle East and North Africa” (June 1985, under the heading “Refugees”, page 115) stated: “The committee would not like to see Canada introduce a ‘designated class’ program for Palestinians as this would be perceived as a political gesture, and Canada’s intentions might be misunderstood in that politically sensitive part of the world.”

This duplicitous policy has continued in the intervening years; here are two examples of the recurring theme of “resettling” Palestinians with a Canadian connection:

• On Jan. 18/ 2001, Agence France Presse(AFP) reported that Palestinian demonstrators in Balata refugee camp near Nablus denounced Canada and Australia for their offer to RESETTLE the Palestinian refugees, and that they burned an effigy of then Foreign Minister John Manley during this protest.

• And most recently, on Sep.4, 2019 the Lebanese paper Al Akbar reported that Canada “has reached an understanding with the United States that it will receive 100,000 Palestinians: 40,000 from Lebanon and another 60,000 from Syria.” Sources in Lebanon were quoted as saying that part of the Trump administration’s ‘Deal of the Century’ aims “to resettle between 75,000 and 100,000 Palestinians in Lebanon and displace the rest to more than one country.” Understandably, the Liberal Canadian government denied it.

Some voices in the Palestinian and Arab community are trying to white-wash the record of the governing Liberal party on Palestinian refugees by highlighting the example of their continued financial support to UNRWA.

This position was also advanced by Canadians for Justice and Peace in the Middle East (CJPME) when they issued a “2019 Elections Guide” which includes their evalution of major Canadian parties on 13 subjects including “Support for Palestinian Refugees”. They gave the Liberal party a “B+” on this subject, with this explanation:
“Harper had also cancelled its funding to UNRWA. Under the Trudeau government, however, this funding has been reinstated. While the Liberals have so far maintained their funding commitments to UNRWA, they have done little to work toward a permanent solution for Palestinian refugees. It is for this reason that the Liberals received a B+.”

Such a position woefully minimizes the dangers of the voting pattern of the Canadian government under the Liberal Party at the UN General Assembly, votes that accurately demonstrate their true position on Palestine. In fact, for the last four years, that pattern was remarkably similar to the Conservative Party “Shameful Record on Palestine”.

Liberal MP Anthony Housefather even bragged about the Liberal record saying: “We have voted against 87% of the resolutions singling out Israel for condemnation at the General Assembly versus 61% for the Harper government…” (Details on the voting records of Harper and Trudeau governments here.)

It is wrong to ignore the Canadian government’s political betrayal of Palestinian refugees as if our cause is simply a charity one. The Palestinian people rejected the Trump’s administration’s $50 billion because it was meant to liquidate national rights. Financial aid to Palestinians is a positive thing only when it is does not accompany the sabotage of their inalienable rights.

The Liberal government’s commitment of $110 million to the UNRWA over four years should not be allowed to buy loyalty to a government that does not miss an opportunity to support Israel and works at every turn to liquidate our legitimate rights and struggles. The Palestinian Right of Return is not for sale the same way Palestine is not for sale!

Finally, as the immortal Palestinian poet Mahmoud Darwish concluded in his masterpiece “Identity Card”: “Beware, beware of my hunger and anger”.