There is no inclusion for most indigenous Palestinians, who cannot even visit their homeland, let alone return to live there. 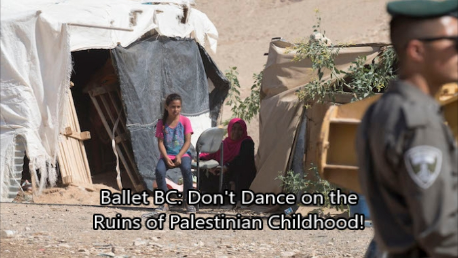 Open Letter to Ballet BC Board of Directors
November 4, 2018

Dear Ms. Brown, Ms. Stevens and Board of Directors:

We would like to draw your attention to an ongoing campaign regarding Ballet BC’s involvement in the CanaDanse Festival in Israel in January 2019, along with 2 other dance companies.
Over 4300 people have already signed a petition to Ballet BC asking them to cancel their performance, and to not help Israel whitewash its crimes against the Palestinian people. There was recent coverage on the U.S. website Mondoweiss about this issue and also coverage in Canadian local media 2 weeks ago.

In fact, support is increasing amongst the Canadian public for sanctions against the state of Israel until it complies with international law, despite the efforts of the political establishment to suppress such information. A recent EKOS survey found that seventy-eight percent of Canadians said they believe the Palestinians’ call for a boycott is “reasonable”, and two-thirds (66%) of respondents viewed government sanctions specifically on Israel as “reasonable.”

Although Ballet BC will be welcomed by Israeli authorities to perform there, you should be aware that Palestinian cultural figures, artists and writers are routinely denied entry to their own homeland. The most recent case is that of Susan Abulhawa, prominent Palestinian author who was just detained and deported by Israel this past week on her way to a literary festival. Cultural exchanges that are predicated on silencing certain voices do not serve the values you claimed to uphold in your statement to local media when questioned about our petition: “Ballet BC serves as a cultural ambassador, inspires diverse communities through dance and promotes inclusion in and through all that we do.” There is no inclusion for most indigenous Palestinians, who cannot even visit their homeland, let alone return to live there.

We hope you will take the time to look at these materials and fully consider what the upcoming performance of Ballet BC in Israel will mean to the Palestinian people and to all people concerned about justice, especially those here in B.C.